We were on our way to our cabin for a few days of rest when a text message from our neighbor ticked in. “Thomas, I studied the new deck you’ve been working on. Right next to it there’s a device that looks very much like a WWII landmine. Shouldn’t professionals deal with that?”

Attached was a photo of a sinister looking object. 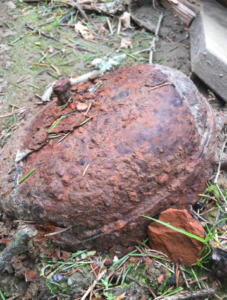 I’m no expert on explosives, and to be honest, it reminded me much of a barbecue grill, but it was impossible to identify it just by looking at the picture.

Thomas called our neighbor to hear where exactly he had found the device. It turned out to be 2-3 ft. from our deck, exactly where Thomas and the boys had been working all summer. The heavy rain from the last days had found new pathways through the muddy soil and uncovered what had remained unknown for years and brought it to our attention.

We made a phone call to the local law enforcement.

They seemed happy to have something to do on a slow Friday night and told us to email the photo and the address.

In the meantime, we kept driving. It’s funny how the wheels keep turning once they’ve spun into motion. Scenes kept playing in my mind of the boys carrying materials right over the spot where the rusty device had been hidden. A few years back, Thomas had even run an excavator right over the site. What if it had exploded before? What if someone had been hurt? It may have been sitting there for 70+ years, but was it still active? Were we in danger? Was it safe to stay in our cabin?

We considered booking a hotel room, but first we made another call to the police, who told us that the photo and our contact information had been forwarded to the naval bomb squad. Truth be told, I didn’t even know such a thing existed. Turns out, I am a very naïve inhabitant of a very peaceful country. According to the police officer, the bomb squad would get in touch with us, maybe some time over the weekend. Right… We asked whether they reckoned it to be safe for us to stay in the cabin. He said, ‘Yeah, most likely. Just don’t touch the thingy.’

Somehow, his laidback demeanor made us more relaxed, too.

After all, who knew what it was? Maybe it was just something completely innocent? As soon as we got there, we ran over to check out the thingy. It was not as big as it had appeared in the photo. In real life, it was the size of a soccer ball or slightly smaller.

At the same time, I got a message from one of my more prophetic friends who had been thinking about us, “How are you doing?”
“Fine,” I answered, “We may have found a landmine, but we’re OK!”
“What?! Like a WWII landmine?”
“Yeah, maybe, we don’t really know what it is, we’re waiting for the bomb squad to tell us what to do with it.”
She freaked out and prayed for our protection in another text message.

Feeling protected and happy, we did a quick search on the internet, and it came up with images strikingly similar to the rusty junk at our property. 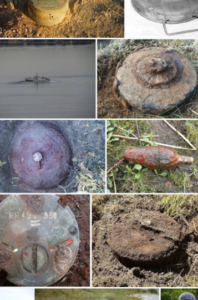 Could it possibly be a landmine? It certainly looked like it. Or was it just a car part or some pot that had deteriorated into a scary appearance? We tried to imagine what it would have looked like when it was still shiny and new. That helped. Looking at it again, it seemed harmless. So, we decided that it was. 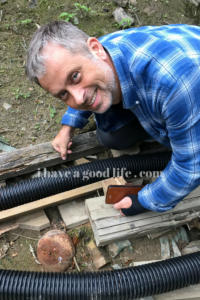 In the following days, we did exactly what we had planned to do, varnishing the deck and enjoying the sun. We hardly thought of the possible threat anymore, that is, until the Commander from the bomb squad called us, asking for more details. Thomas described the object to the best of his abilities and answered multiple questions until the Commander was satisfied that the wannabe-landmine was, in fact, harmless.

“What do we do with it?”, Thomas asked. “Just get rid of it, put it somewhere it’s not in your way”, was the response from the expert. So, we did.

The heavy rain had uncovered what was hidden.

It always does. You experience something, and suddenly you’re back, re-living something that happened years ago. The scar tissue’s once again hurting. The inexplicable phantom pains awake to life. It’s the loneliest of all pains, because who could possibly understand?

With re-surfacing pain comes shame. Not always, but a lot of the time. You thought you had come farther, and yet, here you are. Once again. Stuck in whatever it is that refuses to remain buried. It the chronic resurrectee. It just won’t lay down.

Whether it’s the heavy rain of tragedy and grief that uncover anger and bitterness, or the euphoric happiness of accomplishment that uncover pride and entitlement, it’s still an invasion of an image, of an illusion; an interruption of your collected self.

You may be on the brink of bliss, getting ready for the upcoming wedding, and still be thinking, “Once he gets to know the real me, he’ll leave. Just like the others.”

“If someone knew how damaged I am, they’d steer clear of me. I know I would have.”

Or, “I’m doing really well at work these days, it just can’t last. I’d better get out before they discover who I really am.”

Whatever you are hiding, whatever you are afraid that the heavy rain might uncover, may not be as dangerous as you imagine It to be. It may just be a car part. Or a pot. Someone else’s junk that was tossed in your garden.

What will happen if it sees the light of day?

What if people knew the truth about your car part-turned-potential-landmine? It still wouldn’t explode.

You are not a garbage dump. Get rid of the junk. Bring it into light.

It’s time to heal your garden.